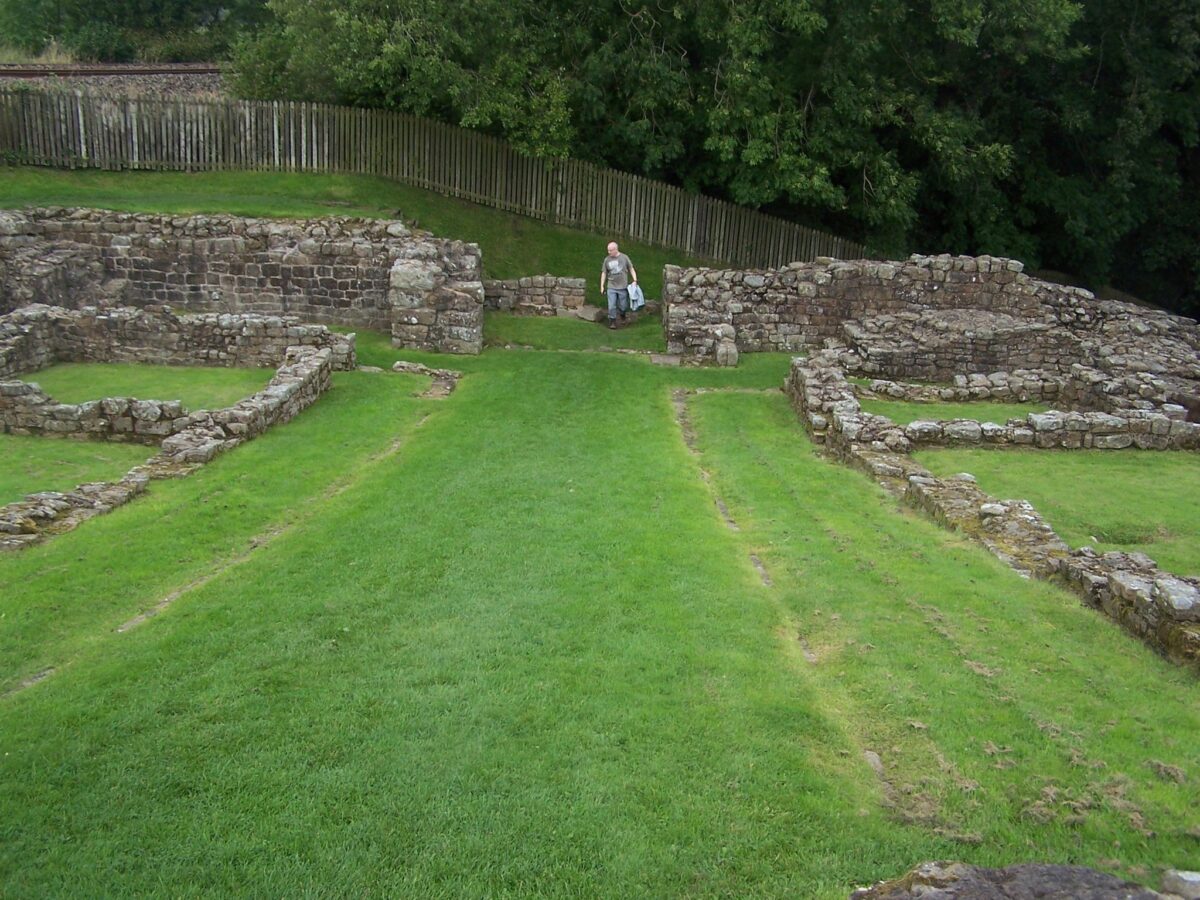 HADRIAN’S WALL IN CUMBRIA – Part 1 – Gilsland to Birdoswald – This is part 1 of of 4 posts, Hadrian’s Wall in Cumbria. It provides information to visitors following a route by car with walking opportunities along the way to explore. It is not following the route of the National Walking Trail, although in some places they overlap.

In summary first: Hadrian’s Wall, now designated a World Heritage Site, is the best known, best preserved and most explored of all the Roman frontiers. It also runs through some of the most spectacular scenery in Cumbria and Northumberland.

This massive military construction and fortification was built, according to Hadrian’s biographer, “to separate the Romans from the Barbarians”. In other words, to act as the Northern frontier of the Roman Empire. It’s total length from coast to coast is 73 miles, of which around thirty miles lie within the boundary of present day Cumbria, stretching from the County boundary of Cumbria and Northumberland, which lies in the town of Gilsland, to Bowness-on-Solway on the West Coast.

In AD122 Emperor Hadrian ordered the construction of a continuous 117km/73miles (or 80 Roman miles), wall starting from the new bridge across the Tyne at Newcastle in the east to Bowness on Solway on the west coast. A series of forts were also to be built own the Cumbrian Coast.

In addition to the wall, small forts called milecastles were built every Roman mile and between each milecastle were two equally spaced look-out towers called turrets. To the north of the wall a deep ‘V’ shaped defensive ditch was dug.

A chain of forts were built along the length of the wall to strengthen its defence and then the wall was extended to the east to Wallsend.

The wall was built in stone from the east. However, from the river Irthing in Cumbria, to Bowness-on-Solway, the wall was first built using turf, but within a few years was rebuilt in stone.

The first section of the wall defences in Cumbria are to be seen from Willowford to Birdoswald Fort. In this section, and also just west of Birdoswald, every component of the frontier defences can be found.

Here you are able to see the remains of the wall in stone, some remains of the previous turf wall, north ditch, vallum ditch, milecastles, turrets, forts, and a roman bridge site. This is the only section of Hadrian’s Wall where it is possible to view all of the defensive structures in any one location

Some of the remains to be explored are as follows:

In Gilsland, follow the signs to Poltross Burn Milecastle. It can be accessed by walking from the Car Park next to the Samson Inn.

This is one of the best preserved remains of a milecastle along the whole length of the wall. Here you will be able to see where the Romans reduced the width of the wall, possibly to save time and effort, and maybe also cost. 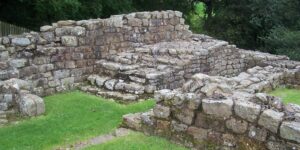 Inside the milecastle are the remains of two barrack blocks designed to hold up to around 30 soldiers. A flight of stairs leading up to the wall walk way also gives and idea of how high the wall may have been at this point – between 3.5m (12ft) and 4.5m (15ft) depending on the slope of the land.

From here return to your car and continue through the village and turn left at the sign to Willowford. Walkers can continue on the footpath along the side of the railway, crossing carefully at the designated point and walking through the field to the car park next to the road. From here you cross the road and walk to Willowford Farm then continue on up the hill towards Harrow Scar Milecastle and Birdoswald Fort..

There are some very impressive remains to be seen here as the route of the wall almost followed the course of the River Irthing. In places, some of the wall remains have disappeared due to erosion.

As you walk towards Willowford you can see again how the wall was narrowed here but was built on the normal wider foundation. The remains of Turret 48A can be seen, 6m/20ft square – recessed into the wall with one doorway leading into the turret but not through the wall. Turrets were built to house a small number of soldiers on look-out keeping a constant watch along the wall

Continuing on towards turret 48B, at the farm track, the wall ditch is still used as a farm track and here it is possible to get a good idea of how it might have looked. The wall remains here are also quite high – up to about 14 courses of stones.

Built into the wall of one of the barns is a Roman Centurial stone inscribed to say who built this bit of wall. A wall plaque shows its location.

Continue down the slope by this very fine stretch of wall towards Willowford Bridge where a Roman bridge was built over the River Irthing. At first the bridge was built to carry only the Wall across the river. The massive masonry foundations give an idea of just how big a construction this would have been. The bridge was later widened and one abutment narrowed to provide a channel for the wheel of a water mill. The river has changed course over the centuries and these bridge abutments look very isolated in the fiield.

Continue to the new bridge, opened in 1997 as part of the Hadrians Wall National Trail. This award winning structure was lifted into place by helicopter. The Irthing Gorge here is also a site of special scientific interest for its plant life.

Walkers can cross the bridge and walk up the very steep path to the top of the hill to Harrow Scar Milecastle.

If you have your car at Willowford, return to the car and drive to Birdoswald Roman Fort Car park. You can then walk east towards Harrow Scar milecastle 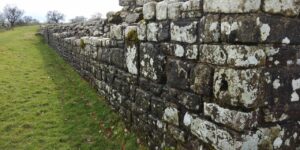 If you walked from Willowford bridge – At the top you can see the remains of Milecastle 49, Harrow Scar. It was from this point west that the wall was originally built in turf then later reconstructed in stone. The stone wall runs west from here to join the north wall of Birdoswald Fort. However, you can still see the mounds of the original turf wall across the field as they head towards the fort and join it near the East gate.

The route description continues with further posts of parts 2, 3 and 4 of Hadrian’s Wall in Cumbria.

Guided tours of the area can be arranged as required. Please contact me here: Contact – Tom Keating Personalised Touring Services