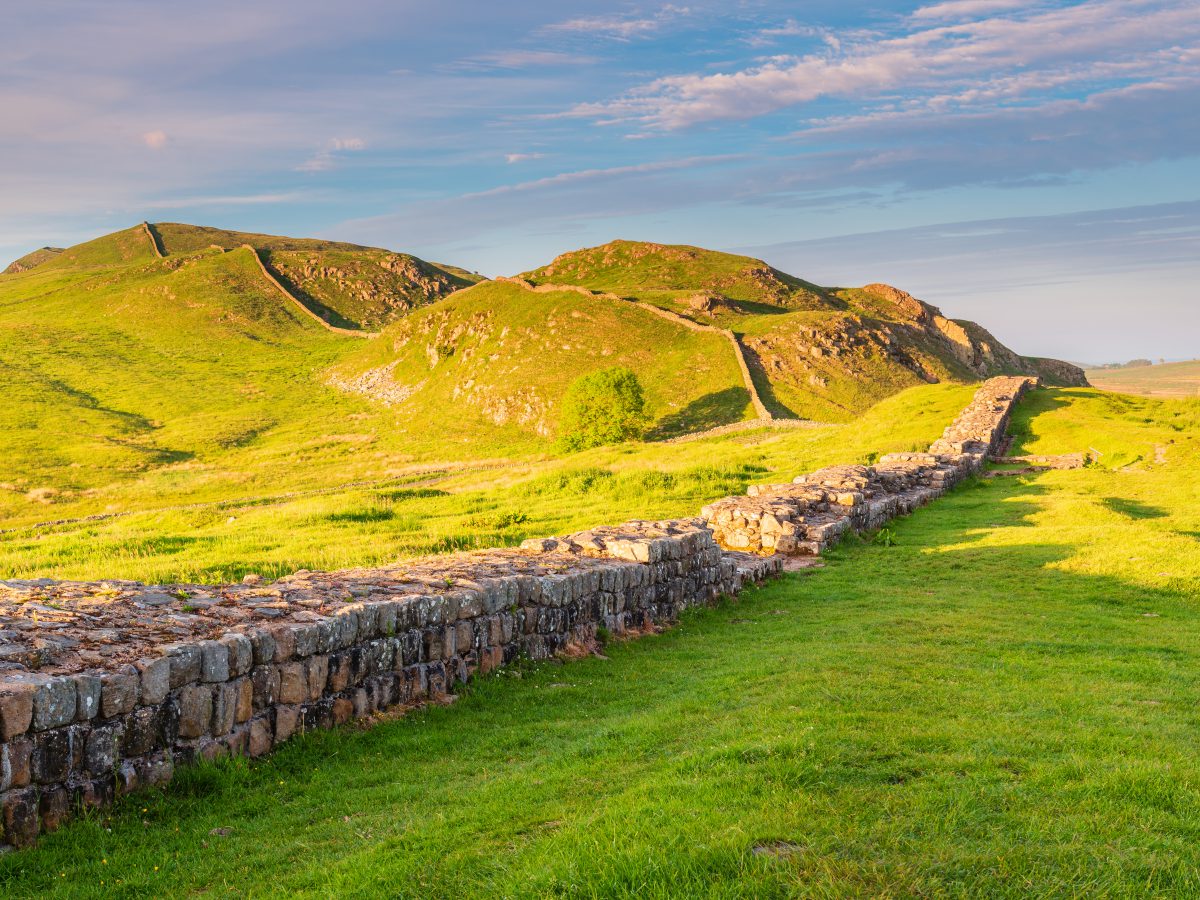 SOME BACKGROUND AND OUTLINE INFO ON HADRIAN’S WALL

Britain had seen Roman invasion and occupation since AD43 and even briefly before that in the time of Julius Caesar. However, things changed from the time of Emperor Hadrian.

By the time Hadrian became Emperor in 117 AD the Roman Empire had ceased to expand. Hadrian was concerned to consolidate his boundaries. He visited Britain in 122 AD, and instructed the governor, Aulus Platorius Nepos, that a wall should be built between the Solway Firth in the West and the River Tyne in the east.

Hadrian’s Roman biographer stated that the wall was built “to separate the Romans from the Barbarians”.  We should therefore quickly dispel a couple of commonly held misconceptions. Hadrian’s Wall was not built to keep the Scots out and  it did not act as a boundary between England and Scotland. The English and the Scots, did not settle in Britain until three centuries after Hadrian’s Wall was built. In Hadrian’s time the ancient race called the Scots inhabited Hibernia (now called Ireland), while the English, or more accurately the Anglo-Saxons, were a Germanic race who inhabited the central mainland of northern Europe.

Over the next six to eight years the professional Roman legionary soldiers built the wall which was 80 roman miles long (73 miles or 117km). Three Roman Legions (2nd/6th/20th) were brought from their bases at Caerleon, York and Chester.

They started in the East at Newcastle and built the wall of stone approx. 6.4m (21ft high) to the top of a parapet and 3m (10ft) wide, later narrowed to 6-8ft or approx. 2m.  The construction was a huge task and vast quantities of stone had to be quarried locally. It was a skilled task required of the Roman Legionary soldiers building the wall, and inscribed stones record the unit of the army who built each section. These are known as centurial stones and can be seen in many museums, with some still in situ. The final section of wall was built from Newcastle, East to Wallsend. (hence the name). Carefully cut and faced stones were placed on the outside and the inside was filled with rubble stone and bound together with limestone mortar.

Although the majority of the wall was built of stone, when it reached the River Irthing, east of present day Carlisle, from there it continued west to the Solway Firth but was built of 18″ x 12″ x 6″ regulation turf blocks (460mm x 300mm x 150mm) and timber fortifications. This was soon replaced in stone.

Milecastles were built every Roman mile. Each pair of Milecastles had two Turrets between them. A Milecastle could garrison between 20 and 32 men. Their prime purpose was to serve as controlled crossing points of the frontier. Turrets could also shelter some soldiers (8-10) though they served primarily as look-out vantage points. As Hadrian’s frontier project evolved, more legionaries were moved up to the wall and large Forts were built, housing, approx. 500 or 1000 men, either infantry or cavalry, or sometimes a mix. Bridges were built across the River Tyne at Newcastle, the River North Tyne at Chesters, the River Irthing at Willowford and the River Eden at Carlisle. In addition to Hadrian’s frontier wall, there were additional Western Coastal defences constructed with a further 6 forts between Bowness and Ravenglass in Cumbria, plus a series of  ditches and milefortlets, but no wall. Whilst there is not a lot of remains to see in some of those sections they are an important part of the World Heritage Site.  (Look out for another blog soon about The Romans In Cumbria.)

During six to eight years of building, the wall reached its final basic form: From the south; an earth mound, then a ditch and further mound, which is now known as The Vallum, then an open area on which a road was built to allow easy access to all parts of the wall all along its length, then the main wall itself, and just to the north of that, a deep, v-shaped defensive ditch. The area between the vallum and the wall was to serve as a military zone. The vallum was built along the entire length of the wall, whereas the north ditch was only built where necessary.

When the construction was completed, the Legions returned to their bases and the forts and structures were manned by Auxiliary Soldiers from all around the Roman Empire.

The Roman Legions were withdrawn from the Province by 410AD when the order came to the Frontier Forts and the Auxiliary Soldiers to “See to yourselves” and the frontier was finally abandoned.

After the Romans left, the wall and forts were robbed of many of their stones for building farm houses, field walls, and Churches. One of the worst periods of destruction came after the Jacobite Rebellion of 1745 when General Wade ordered the construction of a Military Road from Newcastle to Carlisle and for many miles the wall stones provided the foundations for the road.

So the Hadrian’s Wall and Forts we see today are the precious remains of such an incredible Roman structure and frontier system. A great frontier fortification, and whether seen or not you can see it, this is a memorial to the men who served Rome over three centuries, who fought and died, suffered pain, hunger, boredom, and also the women who created homes and bore children in this remote Northern frontier of the Roman Empire.

Hadrian’s Wall was designated by UNESCO as a World Heritage Site in 1987.