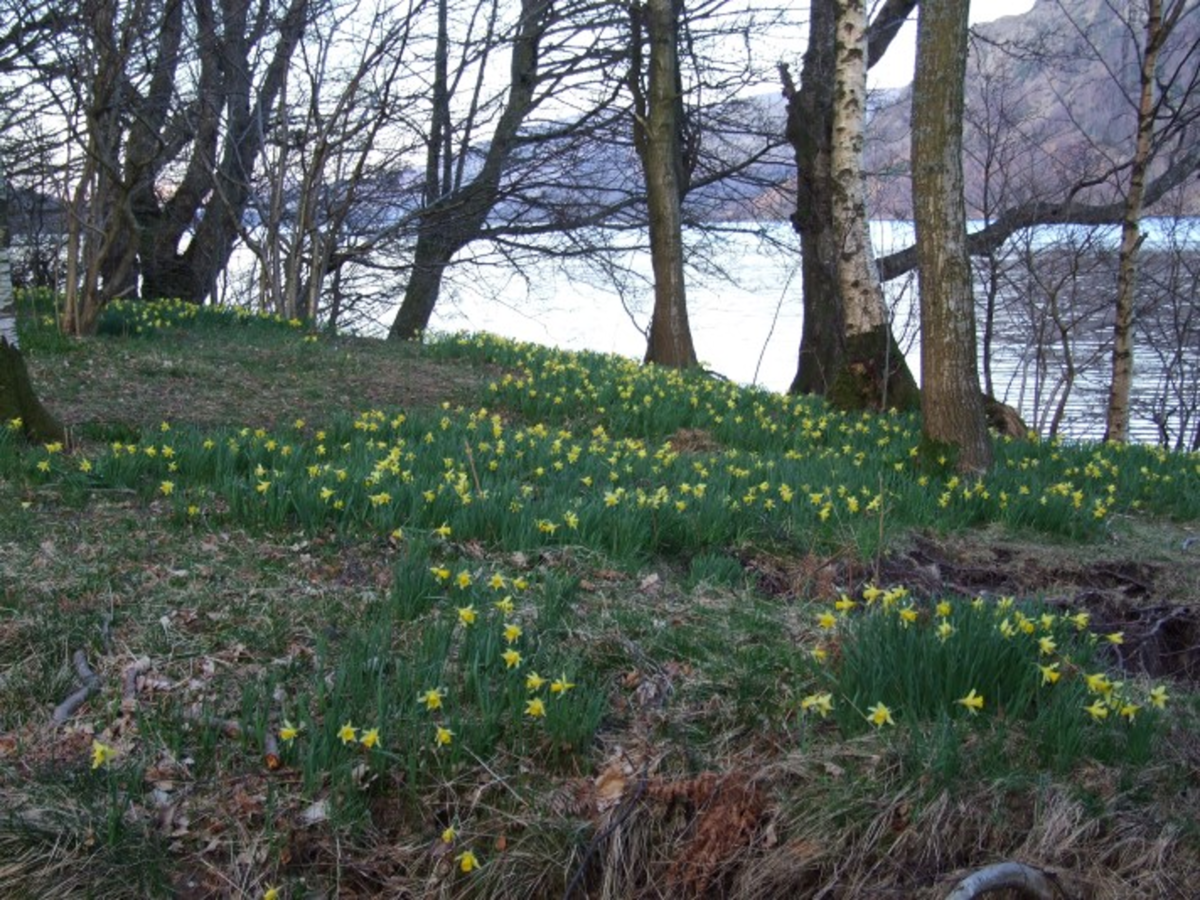 At this time of the year, March-April, as our Spring season is well underway, Easter is a wonderful time. In addition to the Religious importance, there are lots of celebrations and traditions too. As the Spring flowers such as snowdrops and crocus come to life and bring their glorious colourful displays, another flower then comes into prominence – The daffodil – and, I think, this is the one flower which most heralds Spring, a real talisman. It is sometimes referred to as the Lent Lily or Easter Rose.

The native daffodil in the UK was once a wildflower and is called Narcissus pseudonarcissus. It does still grow in some locations. It is a small and very delicate looking version of the cultivated varieties which flourish and are so abundant everywhere nowadays.

Narcissus was a young Boy in Greek Mythology who fell in love with his own reflection, and drooping daffodils are said to show him bending over enjoying his reflection in water. The name Narcissus is derived from the Greek word Narco – the origin of our word narcotic, and all parts of the daffodil are poisonous, particularly to animals such as cats and dogs. The sap oozing from cut daffodils can cause rashes and irritation.

The UK is now the world’s biggest grower of daffodils, and the flower has a very significant place in the history of gardening.

The popularity of the plant grew in Victorian times, as it was cultivated most famously by William Backhouse of Weardale in County Durham.

The Backhouse family were known as owners the of Backhouse Bank. Several of them became highly regarded Naturalists and Horticulturists. William lived at St. Johns Hall near Wolsingham in Weardale and he bred many highly prized daffodil specimens. His most famous was called “Weardale Perfection”

Daffodils were all the rage in Victorian times and a single Backhouse bulb could cost ten guineas. (£800 at today’s prices).

William was a founder member of the Natural History Society of Northumberland, Durham and Newcastle upon Tyne in 1829. He was the first of the Backhouse line to develop a number of new varieties of Narcissus, producing larger and multi coloured specimens and he was awarded medals by the Royal Society of Arts.

Daffodils have also been an inspiration through time to writers, artists and poets.

The most famous of all was William Wordsworth’ s poem “Daffodils”  or “I wandered lonely as a cloud” inspired by discovering a “host of Golden daffodils” one day when walking with his sister Dorothy along the shores of Ullswater in the English Lake District along from Gowbarrow Park beside Glencoyne Bay. Dorothy recorded this in her diary as April 15th 1802.

Another great William Wordsworth link with daffodils came about at Rydal Mount where, in 1826, he bought a field next to their home. He gave the field to his daughter Dora. Sadly, Dora died from tuberculosis in 1847. William planted the field with daffodils in her memory and called it “Dora’s Field” and today we can still see those wild daffodils, in their thousands, a living memory to his daughter Dora from almost two centuries ago.

I have added some beautiful photographs of daffodils for you to enjoy. Some are of the Wordsworth daffodil memorial garden in Grasmere in the Lake District. A couple of Glencoyne Bay and Gowbarrow at Ullswater and also some from local woodlands and  Northumberland Castles, Warkworth and Alnwick with fabulous banks of golden daffodils to enjoy.