NEWCASTLE PUBLIC ART – A TASTER. A short stroll around the area of Newcastle Central station.

Emerging from the train at Newcastle Central Station onto the concourse, please take a little time to first of all look at the entrance to the Metro Station.

Here you will find an impressive vitreous enamel mural by the artist Hilary Paynter, a wood engraver. The work reproduced her original wood carvings in enamel, named “From the Rivers to the Sea.” It was commissioned to celebrate the 250th anniversary of the birth of Thomas Bewick, one of the North East’s most famous artists, who invented and then perfected the art by engraving into the end grain of wood blocks. The mural commissioned was to represent the life and landscapes of the Tyne & Wear Metro. It is a wonderful tribute to Thomas Bewick. We will see another work connected with him later. 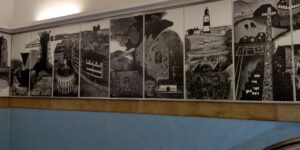 Next, before exiting the station look up above the arches and you will find three roundels, which are cameos of three famous Royals. They depict Victoria and Prince Albert in their youth and their son Edward V11 as a much older man. This magnificent station was opened by Queen Victoria in 1850, without leaving her train!!

Before hurrying off into Grainger Town and the City Centre lets just spend a little time to look around at the art works in the area around the station.

In this location, the art works are quite often missed so I hope you will be pleased to spend some time here and enjoy seeing them.

Before crossing Neville Street walk to the East end corner of the portico. On the pavement outside you will find the next artwork.

“Grainger Town Map” was designed and created by artists Tod Hanson and Symon Watkinson. They did not want a flat city map so designed this layered model map, created from bronze and granite. It shows landmarks from Central Station area up towards Greys Monument, ranging from Medieval to Georgian. See how many features you can spot!

Crossing Neville Street, at the junction with Grainger Street you will come across the figures of three men.

“Man with potential selves” was created by artist Sean Henry. Not 3 men – but 1, something which the artist is keen for us to know. The figures represent our potential selves, an everyman character with three alter egos. The bronze figures are each 2.5m tall. One is standing, one is walking and the other just floating. Visitors and locals alike often take time to walk around the three figures often sparking discussions, which I am sure the artist would be delighted with.

Cross Grainger Street back into Neville Street walking past the County Hotel to the junction with Bewick Street, and turn right.

You saw earlier, the tribute to Thomas Bewick by Hilary Paynter at the Metro Entrance in the Central Station. Here we find the work, “The Chillingham Bull” by Thomas Bewick (1753-1828) famous Newcastle artist and engraver. This plaque is often walked over but not necessarily noticed. Set into the stone flagged pavement is a magnificent brass plaque of a Chillingham Bull, placed here, close by the site where Bewick once lived. The plaque was created in 2003 to celebrate the 250th anniversary of his birth. The famous Wild White Cattle of Chillingham in Northumberland, are still to be seen today. 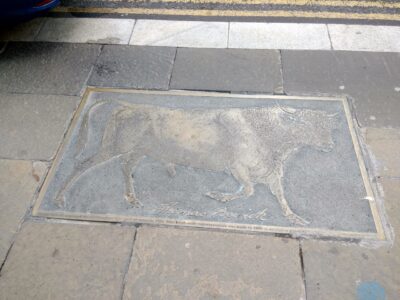 Bewick wrote in his diary of Easter Sunday 1789 that he set out on foot to sketch the famous cattle, a journey of some 45 miles north. He stayed overnight en-route with a friend before continuing the next morning to Chillingham. He noted he couldn’t sketch the bull because “it was wheeling about and fronting me” He was obliged to follow a bull driven to seek shelter alone. Bewick noted he crept on his hands and knees downwind of the bull and out of its sight where he managed to sketch the fine animal. He later engraved this in wood.

Located outside the rear end of St Mary’s RC Cathedral. Cardinal Hume is shown in his Benedictine Habit, with his Pectoral Cross of St Cuthbert around his neck. The work was unveiled by Her Majesty Queen Elizabeth following a service of dedication in the Cathedral. (Cathedral Windows currently under repair behind scaffolding)

The bronze statue stands on a stone outline of the Holy Island of Lindisfarne, set in a garden which reflects his love of the holy landscape Northumbria and the Northern Saints. Nearby is a smaller stone outline shape of Inner Farne the remote isle off the Northumberland Coast where the first monks  and Bishops of Lindisfarne lived in isolation and retreat.

George Basil Hume was born in Newcastle. He always loved the city of his birth and had an undying passion for his hometown football team of Newcastle United. He joined Ampleforth Abbey, eventually becoming its Abbott and then on to become Cardinal Archibishop of Westminster.

Newcastle abounds with street art and sculpture. This area around the station is a small sample.

To find out more about our art walks and many other walks please visit our walks section of our website. I hope you enjoyed this and we have so much more to show you.