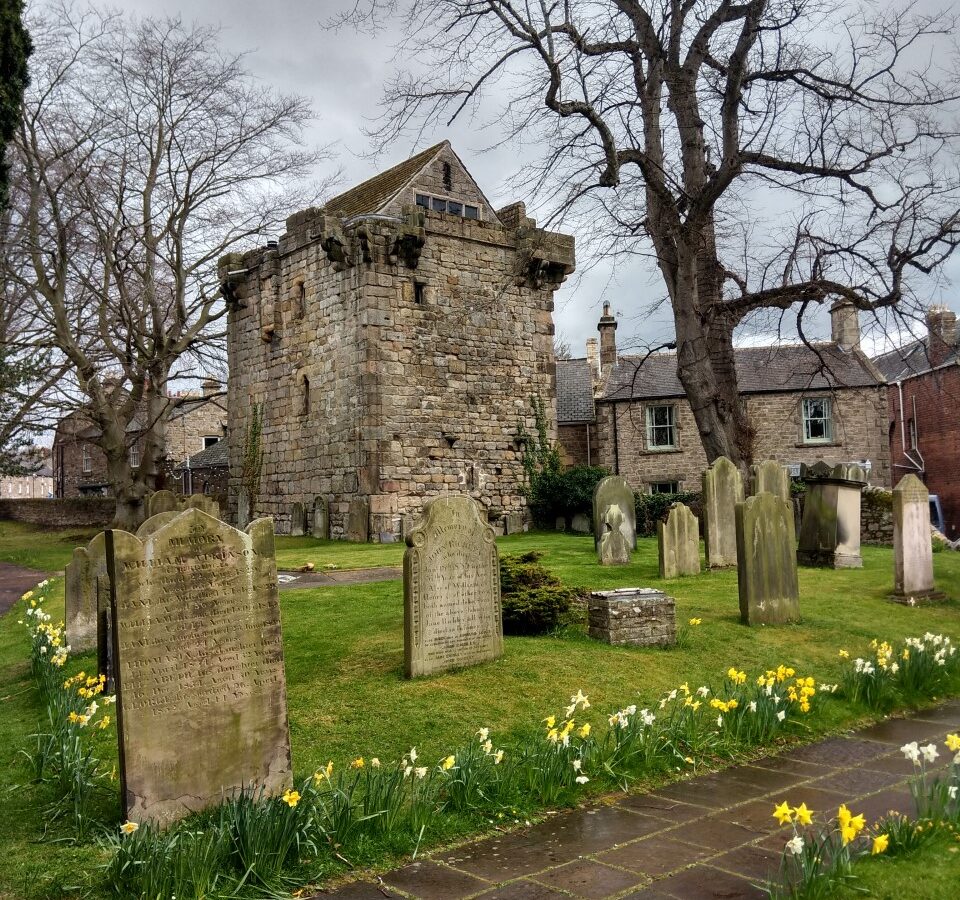 Because of the trouble between England and Scotland the border area was almost a battlefield and warfare was endemic between the two. The Border folk suffered terribly as a result. They began to pay no attention to the laws of the country, living by their own rules to ensure survival and banding themselves together in their families

Although the rest of England mostly enjoyed peace and prosperity by the sixteenth century, in the Border country raiders, or ‘reivers’ were still constantly crossing back and forth in the disputed border areas. Instead of comfortable manor houses, the family  seats of Border families still needed thick walls and tunnel-vaulted rooms to defend themselves and their livestock. This situation had continued for over three hundred years.

Brutal warring families such as the Armstrongs, Elliotts, Grahams, Kerrs and Maxwells were infamous for their indiscriminate plundering and merciless cruelty, which drove fear into the hearts of ordinary Borderers. Reiving was their fearsome trade – a seasonal activity not unlike cattle rustling, only much more devastating. The very presence of the Border Reiver families meant the region was largely ungovernable for over 350 years.

The word ‘reive’ means to rob or plunder. Livestock was the main focus of the raids, although anything of value could be stolen. Border Reivers were not outlaws in the fugitive sense of the word. Some may have lived separate from communities but most did not. They were often either farmers or land holders.

These Border Reivers, an old name for robbers or bandits, carried out bloodthirsty raids in which victims lost their homes, cattle, and sometimes their lives. Family feuds developed as they robbed each other. It was not an English versus Scots situation. Scots Reivers would equally reive in Scotland as well as across the border and vice versa.

What was stolen by one family in a raid was often seized back at the next opportunity. Carlisle itself was frequently attacked: fires often swept through the city, destroying the wooden and thatched buildings. Both Henry 8th and Elizabeth 1st had to order the City and Castle Walls to be repaired to maintain the defences. Many other Tynedale villages and towns like Haltwhistle and Hexham suffered also.

Reiving reached its height in the mid 16th century by which time many murderous feuds between Border families had lasted for generations. But, reiving was not limited to any particular social class. Many nobles, including some of the March Wardens, responsible for law and order, were themselves some of the most notorious raiders. Reiving was simply an integral part of Border life.

Defensive buildings known as Pele towers, and Bastle Houses were built (see below).

The Borders were divided into six Marches for administrative purposes, each with an appointed Warden to administer justice and uphold the law. There were 3 Marches on each side of the border: the East, Middle and West Marches. The Scottish Middle and part of the West Marches made up what would now be regarded as the Borders. The Marches had their own laws, separate from either London or Edinburgh.

In the years following the Union of the Crowns (1603) James 1st of England/6th Scotland pursued a policy to stop the raiding and impose the rule of National Law. Eventually, reiving began to die down and many of the families left the land, travelled to towns and cities for employment, but were driven out. Many went first to Ireland and then eventually to the new world. That is one the reason why today we still have family groups from North America returning to investigate their family history and visit places where their ancestors lived.

Today, the Castles, Tower houses, Pele Towers and fortified farmhouses, known as Bastles,  still bear testimony to the harsh rule of Border law in those restless days. In many places in Northumberland, Church Towers were constructed with defence in mind against raiders. These towers became known as Northumberland Towers.

The word Blackmail derived from the reivers as a term for protection money demanded by raiders from farmers and small holders along the Borders so that they were left alone.

Bereaved (Be-reived) was the term for losing a loved one either by death or kidnap for ransom to the Reivers.

Caught “Red handed” is a term which came into use also in these times, when raiders were captured with the bloody evidence of their activities.

PELE TOWERS and BASTLE HOUSES – In addition to Reiving raids there were many incursions by Scottish Armies. For example, in 1345, Robert the Bruce marched from Scotland to England with an army of 30,000 men, leaving death and destruction. Farms and Churches were destroyed, Abbeys plundered and burned, people and cattle slaughtered.

Determined to resist this and Reivers raids, the people built defensive structures known as Pele Towers unique to the North of England. Across Cumbria, Northumberland, County Durham and even further South into parts of Yorkshire, there were hundreds of defensive buildings constructed or modified for defence.

Pele Towers were small stone buildings with walls from 3 to 10 feet thick, square or oblong in shape. Designed to withstand short sieges they usually consisted of three storeys. Bastles were essentially fortified farmhouses, built between other farm buildings.

A tunnel vaulted ground floor which had no windows, which was used as a storage area and which could accommodate animals. The first floor contained a hall and kitchen, the main living quarters. The top floor was space for sleeping. Although I don’t suppose they got much sleep during raids. The battlemented roof was normally flat for look out purposes, and to allow arrows to be fired at raiders, and missiles hurled down on unwanted visitors and also to allow smoke signalling to make others aware of the presence of raiders. Entry was at first floor level and the floors were usually connected by an internal staircase.

Today many of these towers have had additions or modifications. Some, such as Yanwath hall in Cumbria, are part of a working farm. Others, such as Sizergh Castle also in Cumbria have been extended into large Castles or Stately homes, and Preston Tower in Northumberland is used as a living museum. Some have fallen into ruin, others have been dismantled so the stone could be used for other buildings. Some towers were built onto Churches to act as both Pele Tower and Bell Tower.

The time and stories of the Border Reivers are of great interest to visitors. Many of our tours around the region will see examples of these and their stories told. If you are interested in any location in particular then please contact me here.

On a recent short journey, no more than 30 minutes from where I live on Tyneside, I was able to photograph some examples of these towers . I hope you enjoy the photos.