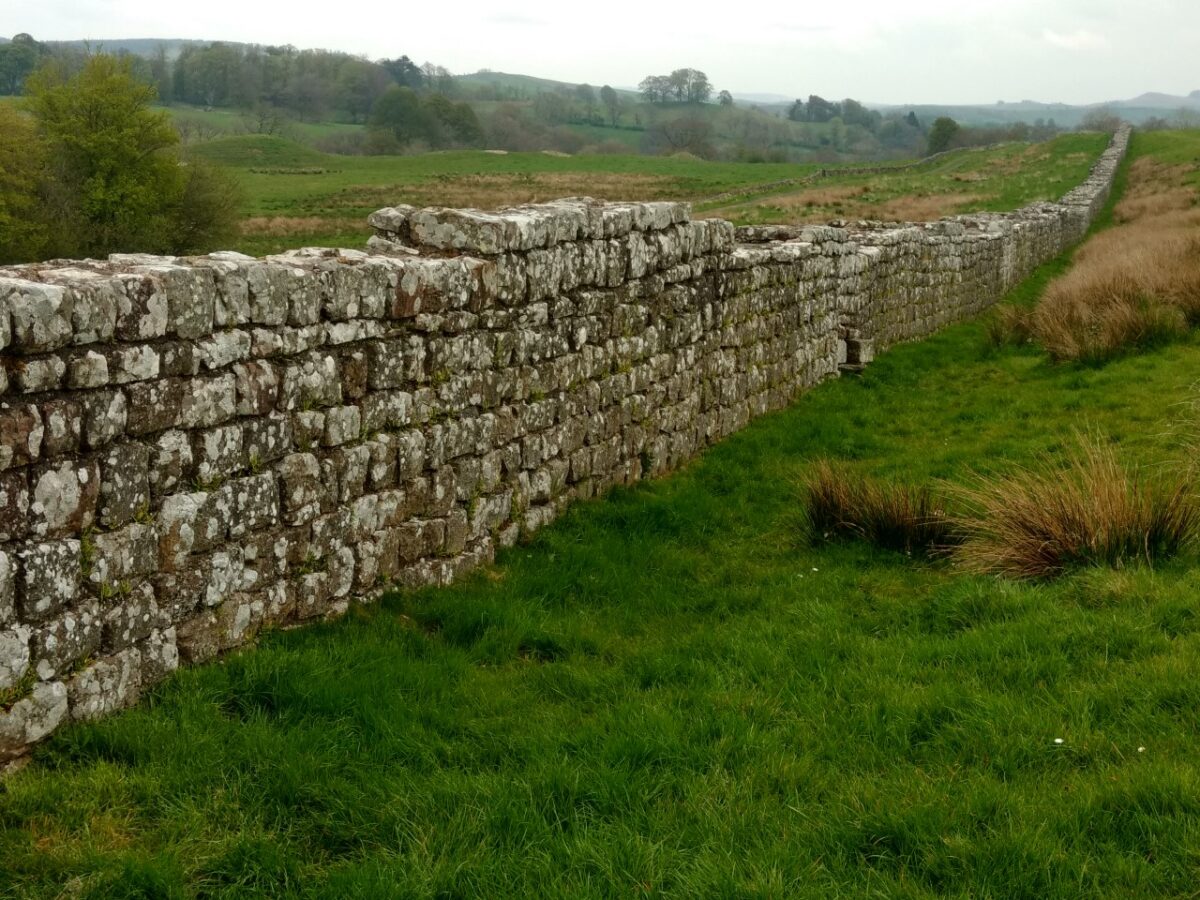 HADRIAN’S WALL IN CUMBRIA – Part 2 – Birdoswald to Carlisle – This is part 2 of of 4 posts, Hadrian’s Wall in Cumbria, providing information to visitors following a route by car with walking opportunities on the way to explore. It is not following the National Walking Trail, although in some places they overlap.

BIRDOSWALD ROMAN FORT – (BANNA) – This fort was built to protect the bridge over the Irthing. The walls, four of the gateways and the granary buildings are among some of its remains. In the fort, some of the old farm buildings have been converted into a museum and educational centre. The site is under the care of English Heritage. It’s a great introduction to the wall and gives you an insight into almost 2000 years history of the fort. You can see a model of how the wall looked and also see some of the finds from the fort.

The views from the South Gate of the Fort over the Irthing Gorge are quite stunning and well worth the walk and at the East gate and looking East, there are also fine views of the wall heading to harrow Scar Milecastle and Willowford.

The Wall can be seen leaving the north west corner of the fort with some very good remains immediately next to the roadside. Just a little way further west you can still see the mounds of the turf wall and ditches in the field to the south.

The replacement stone wall line is almost under the road but you can still see remains of the north ditch at the side of the road.

As you continue west you pass the remains of Piper Sike and Lea Hill turrets immediately on the side of the road. Just before Banks Turret the remains of Pike Hill Signal Tower can be seen.  It was used for signalling communications as there was an outpost fort to the north of this point at Bewcastle.

Continue to Banks East Turret (52A) one of the best preserved of the wall turrets with substantial remains. Here also you can see more spectacular views over the Irthing Valley. At Banks village, the wall continued its route west towards Castlesteads Fort. However, nothing now remains of the fort to be seen.

To allow you to explore a little more of the area, here we follow a slight diversion away from the original route of the wall and continue on the road to Lanercost, where you can visit the ruins of the 12c Priory, built by Augustinian Canons. Stones from Hadrians Wall were used to construct the Priory and many inscriptions can still be seen. Lanercost has a fascinating history, including visits by King Edward 1, when Parliament was held here. in these turbulent times it was attacked by raiding Scots armies, and on one occasion by William Wallace.

After the dissolution of the monasteries during the reign of King Henry 8 the buildings gradually declined and fell into ruin. The present parish church was constructed from the nave of the priory church in the mid 1700’s. The church is beautiful and serene, with lovely views through the East window to the ruin beyond. There are also windows by Edward Burne Jone and William Morris. The Monastic site is now in the care of English Heritage. Lanercost tearooms are a welcoming place to stop and refresh.

Continue West towards Brampton.  Just after Lanercost Priory, before you cross the river, have a look at the beautiful elliptical Abbey Bridge which crosses the River Irthing. This was built in 1723/4 replacing an ancient wooden bridge. It was replaced by the modern road bridge which you will cross.

On the left is the rear entrance into the grounds of Naworth Castle. With origins from the 13th century it was the seat of the Barons Dacre. Their successors, the Howard family are Earls of Carlisle. It is well worth a visit by private arrangement. Please note, The main castle entrance is located off the main A69 road. 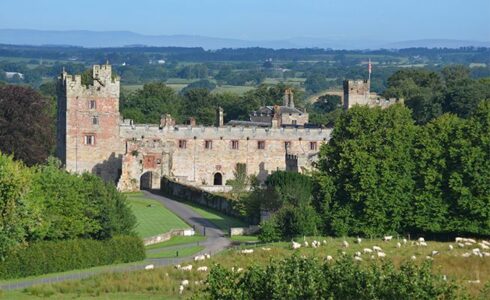 Continuing on the A689 turning right to Brampton. On your right and just East of Brampton is a huge mound, a motte, an ancient defensive location on the top of which is a statue of the 7th Earl of Carlisle.

Turning left to the town centre, Brampton is an ancient Market Town, with its market place and 17c Moot Hall, redesigned in 1817. This is a wonderful octagonal shape building, with a staircase to its upper level, used as a council meeting place. It was formerly a gaol which is now the Tourist Information Centre.

During the 1745 Jacobite Rebellion, Bonnie Prince Charlie had his headquarters here in Brampton whilst his army laid siege to Carlisle. You can still see the property just off the market place. A wall plaque tells the story.

The parish church of St Martin, designed by Pre-Raphaelite Architect Philip Webb, contains windows designed by the pre-Raphaelite artist Edward Burne-Jones and made in the William Morris Studios.

As you leave the main street to rejoin the A689, notice on the right, a statue of Emperor Hadrian. This was placed here by the local Chamber of Commerce in 1999 for the people of the town.

On the western outskirts of the town, the ancient Parish Church was another built of Roman stones. The church was rebuilt in the 19th century but the chancel of the original remains.

Turn right onto the A689. This road is following the route of the original Military Road constructed under the orders of General Wade. During the 1745 Jacobite Rebellion, Carlisle was captured by Bonnie Prince Charlie’s Jacobite army. The English Army based in Newcastle were unable to travel west to save Carlisle because of the terrible conditions of the roads. For this reason, General Wade ordered the construction of a Military Road from Newcastle to Carlisle. His engineers commenced in Newcastle and began following the line of the Roman Wall. Sadly, the wall itself was simply turned over and the stones used as the foundation of the road. It was the biggest single act of destruction of the Roman Frontier and the major reason why we see so little of the wall in many places, until the central sections are reached higher on the hills where the road builders could not take the stones. Over the centuries after the Romans left, wall stones were used for many other reasons such as building farm walls and barns, churches and houses. Lanercost Priory and Carlisle Cathedral were built mostly with Roman stones. It is easy to understand that given a lack of understanding or appreciation of the history of the Roman frontier system at the times it must have been seen as a handy stone quarry!!

Continue by car following the A689 towards Carlisle, passing The Fleece at Ruleholme, Carlisle Airport and bypassing the villages of High and Low Crosby. After crossing the M6 motorway and passing the Near Boot Inn and Carlisle University Brampton Campus, if you wish to turn into the Stanwix area take a right turn at the lights into Well Lane. Look for the parish churchyard or head to the Car Park of the Cumbria Park Hotel. That’s where you will find a notice board and Roman statue locating the line of the North Wall of the fort known as Petriana, named after its Commander. This was the largest fort on the wall, housed 1,000 cavalry. It replaced the Roman fort of Luguvalium in Carlisle, which then grew as a Roman town and trading centre. The river Eden flood plain below the fort was used for Cavalry exercises. 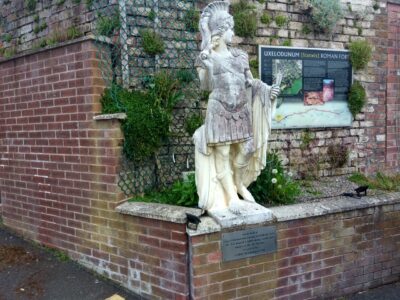 Now you can head into Carlisle to enjoy the attractions of this great Border City.

Part 3 of this blog series will follow. If you are interested in a tour of this area please let me know here: