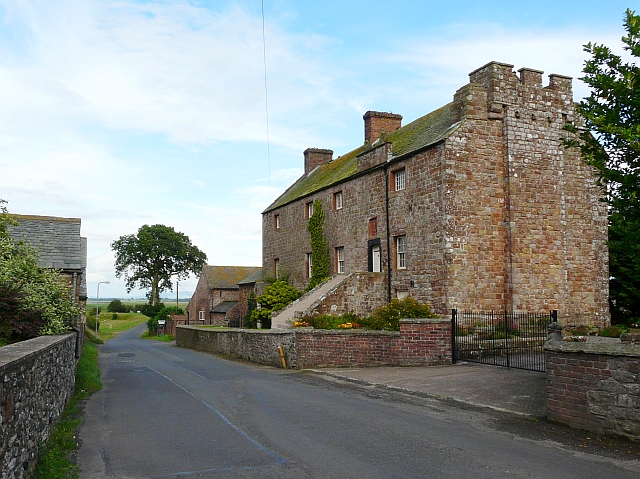 This is a continuation of the previous Posts 1 & 2 Hadrian’s Wall in Cumbria, providing information to visitors following a route by car with walking opportunities on the way to explore. It is not following the National Walking Trail, although in some places they overlap.

Continuing from Part 2 – As you leave the Stanwix area and the site of Petriana fort, Hadrian’s wall crossed the River Eden by a Roman bridge just downstream of the present Eden Bridge, and behind the Castle.

Follow the main road to the city and continue into Carlisle by crossing the modern day River Eden bridge. There are many places for public parking, the main ones being next to the Castle or behind the Cathedral and the Railway station. They are all well placed for walking into Carlisle.

It is well worth spending time in Carlisle. There are the added attractions of the Tullie House Museum, the Castle and Cathedral. It’s a brilliant town to wander and explore. Carlisle Tourist Information Centre in the market place provide an excellent range of information leaflets of Carlisle and the area including the wonderful area of the Solway Coast which you will travel into soon.

CARLISLE – The Roman town of Luguvalium was built earlier than Hadrian’s Wall. The original fort on the site, from 78AD was located between the present Castle and Tullie House. The Roman fort was abandoned and demolished when Hadrian’s wall frontier and Uxellodunum (Petriana) fort were built.  Carlisle was replanned and became a Roman town with a Forum, Temples and Baths. After the Romans left, the town became the thriving administrative centre of the area and became known by its Celtic name of Caer Leul. Today, few Roman remains can be seen in the town.

However, Tullie House Museum, a 17th century Jacobean mansion was extended in the 1950’s and redesigned and extended again in 1989. It contains some of the best finds from the western half of the Wall. In the Roman Gallery there are displays of everyday Roman life and a reconstruction of how the Turf Wall would have looked. It provides a perfect introduction to the Romans in Cumbria and Hadrian’s Wall and is a great starting point for visitors. Here you can also discover the stories of the infamous Border Reiver families and the turbulent period in the borders area mainly between the 13th and 17th centuries and maybe find out if your family surname has reiver origins. A tunnel connecting Tullie with the Castle is where you can see a Granite stone carved with the words of a curse on the Border Reiver families by the Archbishop of Glasgow. 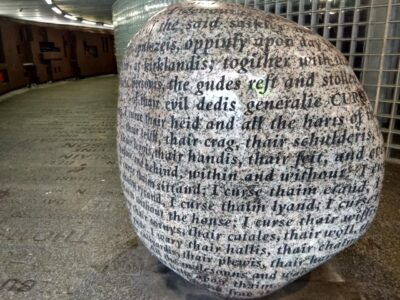 The Art Gallery located in the original 17th century Jacobean house, contains wonderful examples of Pre-Raphaelite artist works including many examples of Edward Burne Jones who had a great relationship with the Howards from Naworth Castle. Tullie also has an excellent in-house café.

The Market place is located on the area of what was once the Roman forum. Have a look at the Market Cross dating from 1682 on the site of a much older cross. The Tourist Information centre occupies the old town hall which was the council meeting place and a Courthouse. 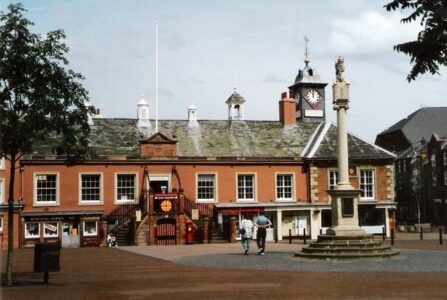 The Cathedral was founded in 1122 with 13th century extensions and was built largely of Roman stones. This can be easily identified, particularly from the exteriors at the West end. The spectacular barrel vaulted painted ceiling in the choir will have you “seeing stars” and the East window is known as the largest and most complex decorated Gothic window in England. The fine tracery contains fine 14th century stained glass. The Cathedral Treasury contains fine displays of Cathedral silver and shows the story of Christianity in Cumbria through the centuries.

The Castle was first built from 1092 by William 2nd (Rufus) who drove out the Scots and restored English rule. His earth and timber castle was rebuilt in stone by King Henry 2nd from 1122. At this time the city walls were built and they are worth a close look. 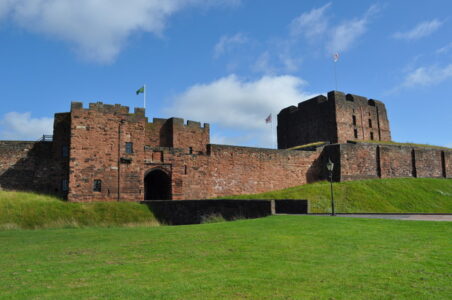 The area was frequently raided by the Scots and the castle guarded the western end of the Anglo Scottish border and the Solway. In frequent conflicts the castle was besieged many times and even held by the Scots for a number of years. The keep is the oldest surviving part of the castle from the 12th century. The Military Museum of Cumbria is also located at the castle.

After exploring Carlisle continue your car journey leaving Carlisle by the A595 West, turning right on the B5307 and then quickly take a right turn to join the road West to Burgh by Sands and Bowness on Solway.

The Solway Coast is an area of Cumbria often overlooked but has its own gorgeous landscapes and seascapes and is now designated as an Area of Outstanding Natural Beauty (AONB) which extends South down the West coast to Maryport. The plant life and wildlife are wonderful and there are a numberof Nature reserves and sites of Special Scientific Interest. The area is particularly liked for birdwatching at different times of the year. 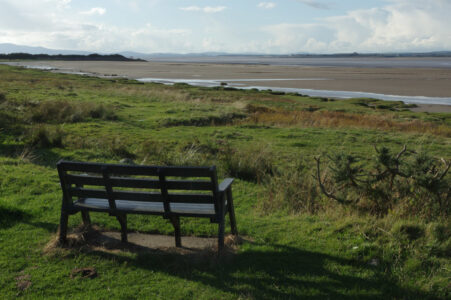 The mix of history here, as well as turbulent times, includes a canal, railway, port and viaducts. The buildings are special, many built for defence including the churches.

The coastal salt marshes are used for open livestock grazing and the area is also subject to tides. Please be careful, follow the instructions and check the notice boards for tidal information.

In the past, the Solway crossings at low tide were used by Scottish Drovers who brought their cattle over on the way to markets. A reminder of this is found in the pub name The Drovers Rest at Monkhill.

After Carlisle the route of the wall then continued west, almost following the course of the River Eden.

At Burgh by Sands (Aballava) nothing survives of the fort, manned by cavalry and other units from Europe and North Africa. It was probably built to protect fords over the Solway which could have been used by raiders at low tide. The road you are driving follows the original east-west access route through the fort.

The parish church of St Michael is built of stones from the fort and wall (as were all the village churches in the area)  and is a good example of a fortified construction, built for defence in times of raids, a sign of the turbulent times in this border area, which continued for many centuries. Nearby is a monument to King Edward 1st where he died in 1307 as he was preparing to cross the Solway with his army. His body lay in state in the church.

An unusual feature can be found in a few of the oldest building in Burgh by Sands. The cottages are known locally as Clay Dabbins,a building style first brought here by the Vikings in the 9th century. They used local easily available materials, clay, cobble stones, timber, and turf, and for the roof, reeds, straw, heather or bracken. There are three in the village which can only be seen form the road as they are private residences. Please respect that privacy. They are Lamonby Farm, Leigh Cottage and Edna’s Cottage.

On the village green area there is a wonderful statue, next to the Greyhound Inn in memory of King Edard 1st placed there for the 700th anniversary of his death. 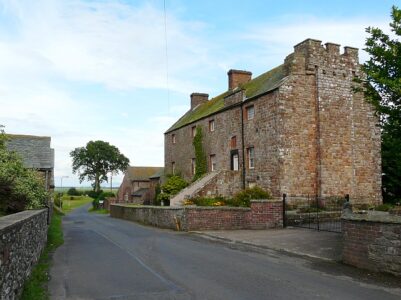 Drumburgh (Concavata) was the next fort along the wall. Nothing survives from this fort although many of its stones were used to construct Drumburgh House, which was built in the 16c during the reign of King Henry 8. It was known as Drumburgh Castle and was originally a defensive farmhouse known as a Bastle House then was given permission to crenellate, the defensive structures on top which gave it the castle like appearance.  This is also a privste residence but canbe seen from the road.

Port Carlisle developed into a port in 1819. Carlisle was a massive industrial city so transport links were needed and a canal dug to the city and sea links were developed to other coastal towns and cities including Liverpool and Whitehaven. It also developed into a late 19th century tourist destination with a hotel, pubs and houses and public salt baths. The canal eventually silted up and was replaced with a railway in 1854. Remains of the old port, railway station and canal walls can still be seen. 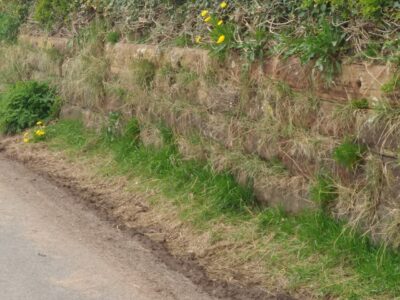 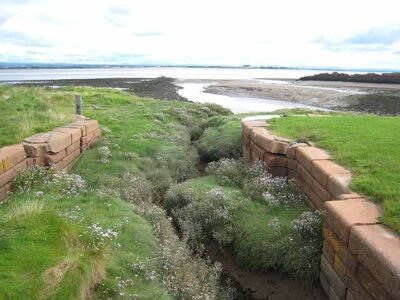 Bowness-on-Solway (Maia) was the last fort on the wall, at the western end of the wall and was built to defend the Solway Estuary. There are no remains of the fort to be seen today. This is the location of the start/or end of the Hadrian’s Wall path – the national walking trail. A community garden on the foreshore at The Banks is the official start/end of the trail.

However, this was not the end of the Roman frontier defences. These were continued down the West Coast to Ravenglass with a series of defensive structure and ditches, but no wall.

Details of this is and the route to follow is contained in Part 4 – Bowness on Solway to Ravenglass -The Western Coastal defences.